For more than 50 years, the Rock—a 97.5-ton hunk of Knox dolomite stone—has served as an iconic campus symbol.

The corner of Volunteer Boulevard and Pat Head Summitt Street is visited often by people equipped with spray paint, paints cans, and brushes. Through our messages on the Rock, we have celebrated victories, expressed opposition, remembered those we’ve lost, shared joy, and when necessary, stood united against hate. The Rock’s messages are seen by thousands of people passing by each day.

Significant moments have been reflected on the Rock for decades including a memorial to Pat Summitt, messages to our athletic rivals, wedding proposals, and baby announcements. 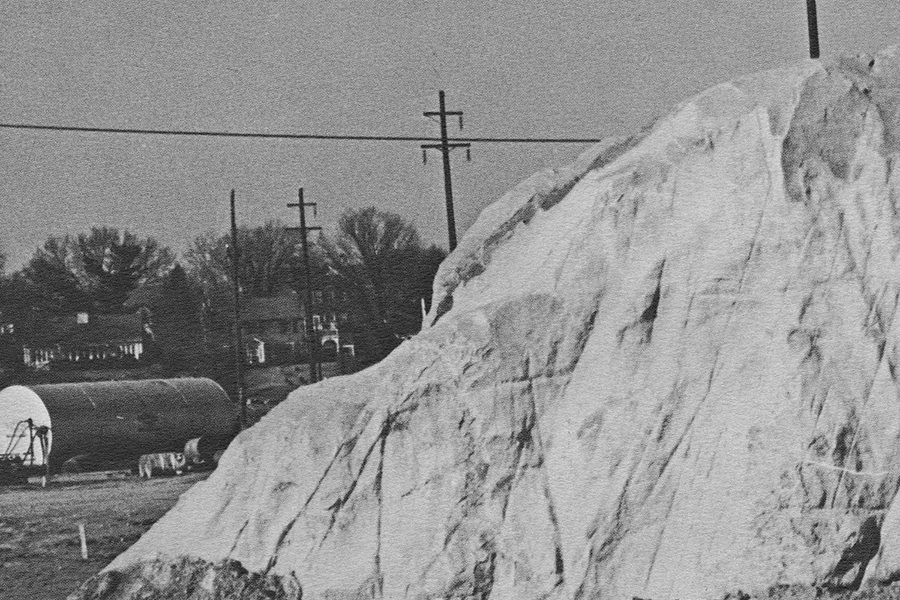 In its earliest days, a small portion of the Rock was visible on the lawn of Calvary Baptist Church, which was located where Fraternity Park is now.

In 1966, after the site had been acquired by the university, the Rock was unearthed by the A.B. Long Company during grading work for streets and buildings.

Later that year, the university began the process of selecting a name for the hunk of stone. The Daily Beacon reported the names that had been advanced, including Kissing Rock, the Fellowship Stone, the Volunteer Image, and the Rock. The simplest of those names—the Rock—was chosen. The tradition of painting the Rock likely dates back to about 1980, according to an alumnus who was quoted in a story by the Daily Beacon. Since then, thousands of students, employees, community members, and visitors have left their mark on the Rock.

When a new master plan—a long-range vision for campus—was presented to students, their only opposition was to the possibility that the Rock would need to be moved to make room for a parking garage. Following the terrorist attacks on September 11, 2001, “God Bless America” was painted on the Rock and remained unmarred for more than two months.

“There aren’t many things that stay up that long,” said Terry Ledford, director of energy management for Facilities Services. “This image stayed on the Rock longer than any other image has in the thirty years I’ve been at UT.”

Bill Dunne, professor of earth and planetary sciences, took a small sample from the Rock and determined that the slab was 500 million years old and composed of Knox dolomite. Based on the direction of the sediment layers, he determined that the Rock was originally in the ground on its side compared to its current position. When construction plans for the Student Health Center were announced, university officials decided to move the Rock across the intersection. During a 13-hour process on July 15, 2009, the Rock was moved 275 feet to its current location on the lawn of the Natalie L. Haslam Music Center. The move was broadcast live on the student radio station, WUTK 90.3 “The Rock.”

The move was made cautiously amid concerns about damaging or breaking the iconic campus symbol. As workers used a massive crane to hoist the Rock from the ground, they determined that even the largest truck available in Knox County was simply not large enough. Instead, a specialized heavy-hauling flatbed was brought in. Once the Rock was loaded onto the flatbed, the truck began the incredibly slow, harrowing ride down Pat Head Summitt Street straddling an asphalt-filled utility trench that had been dug in the center of the road.

The Rock was settled into a freshly dug pit in its new location at about 9 p.m. that night in the midst of a thunderstorm. Dozens of students, faculty, staff, alumni, and others watched throughout the day. The Rock was reopened for as a place of free expression at a dedication ceremony in August 2009.

2015 Paint Slides off the Rock During a very hot summer, layers upon layers of paint slid off the Rock. For the first time in decades, the Rock became a blank canvas once again. In its 50th year above ground, the Rock became a canvas for Payton Miller, who held the unofficial title of painter of the Rock until her graduation in 2017.

Following the death of legendary women’s basketball coach Pat Summitt in June 2016, Miller’s painting memorializing Summitt remained untouched through most of the summer and is believed to be among the longest-lasting images.

Approximately 1,050 cans of spray paint, 300 hours of work, and 30 paintings later, Miller took her final bow with a painting of Smokey holding a spray paint can.

In fall of that year, the campus celebrated 50 years of the Rock by sharing their memories and images. The News Sentinel reported on the milestone. In response to hateful messages on the Rock, the Campus Ministers Council in collaboration with the Student Government Association and the Faculty Senate organized a community unity event. United at the Rock drew hundreds of Volunteers to the Rock to cover it in a rainbow of handprints.

2019 Second United at the Rock In February 2019, the community came together again to remember and reflect on the events of the previous year. The day included a volunteer fair, painting the Rock, and a closing ceremony with remarks and music.

In October, a livestream from the Rock was launched to provide a view of the changing messages and artwork, while creating community accountability for a space that belongs to everyone.

The flagship campus of the University of Tennessee System and partner in the Tennessee Transfer Pathway.